I screencapped all the character CG wallpaper from the Xbox 360 version of the game. These are rare poses that don't seem to exist elsewhere, or are only available in inconvenient form, such as spanning two pages in the DW5 data book. The raw caps are 1920x1080 PNG, 2-3 megabytes each.

You can also download the wallpapers as ZIP archives.

Hey there! Once upon a time, I made some DW-related posts to this comm. Now I have added SW to my interests in this fandom and bring more fic.

cherrytruck. ♥ Alternate history is go! The fic is based almost exclusively on SW2 canon: Yukimura's Dream (because it includes both the victory at Sekigahara and Sakon's gun accident) and Mitsunari's Dream (contains the siege of Edo and his unique fan). Well, I had to add Sakon to the latter level here. I never let him die at Sekigahara in the game (once it happened and I got so furious I replayed the level immediately TO MAKE IT GO RIGHT, and I assume he survives in such a case and Koei was just being careful about putting him in a later level in case the player doesn't salvage him). Seriously, my favourite part of SW2 is messing with that part of history and making these guys win instead. XD Any feedback would be great!
Disclaimer: The Samurai Warriors series belongs to Koei.

Title: Just a Dance
Characters: Cai Wenji x Cao Ren
Rating: Everyone
Notes: Because these two totally need to bond over their contemplative, calm demeanor about the sorrows of war. KOEI might not give me jack to go on, but I'm well used to that by now.

Hi guys :) Just posting to let you know that I have a few SW doujinshi for sale!
(Pairings include Mitsu/Yuki, some Sako/Mitsu, and Everyone/Yukimura ._.) 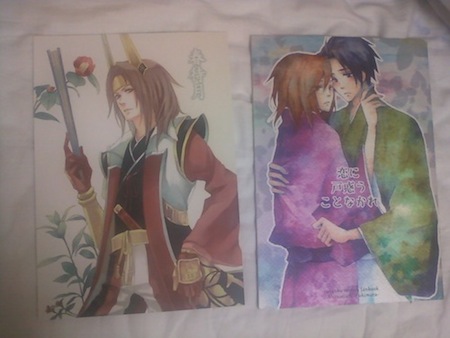 Sale post over here :D (scroll a bit, other fandoms are included)
Thanks for looking!

Hi all! Long time no see - sorry about that! I come bearing a gift (albiet a sad one):


Before the Void
Zhou Yu/Sun Ce; pg-13
Sun Quan reminisces about the two people he looked up to in his youth, and how they taught him the importance of love.
note: based off of Chen Mou's The Ravages of Time manhua. So slight au to the novel and the games, but it should still be readable.
warnings: character death.

( They say that Sun Ce could see ghosts better than anyone else because he challenged death at every turn. )
Collapse